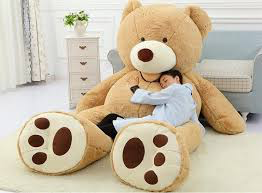 By Ho Gwaine Nam
#1 in the series
My very first relationship that I remember was with my giant teddy bear. I was too young to acknowledge obsession at that age, but I know now that it was my first obsession.

Somehow I never named that bear. I don’t know why but for me it was just The Bear. It meant the world to me. Except for the time I went to kindergarten, I spent most of my days with The Bear. I just liked how he felt – all the soft parts of his body. It may sound a bit dirty, but I just truly liked how he was. Most importantly, he didn’t say a word or give me the eye that I often received from my father. He was just there every time, whenever I needed him.  I cannot count how many nights I fell asleep on his chest after crying.

However, there was a time that I had to break up with The Bear. It was a result of my obsessive love to The Bear.

One day I thought that maybe he wants to see more of the world, or at least to see how my town looks. So I took him up to the rooftop of my building (we lived on the 1st floor and the building had 4 floors in total). I set him at edge of rooftop, and I was so happy and proud of myself that I had showed him the world.

I still don’t know exactly what happened, but The Bear began to fall, but because of my obsession, I couldn’t let him go. I fell from the rooftop, four stories down, with The Bear. Luckily, The Bear fell first and I fell on him. I didn’t get hurt at all. The large size of The Bear saved my life and, therefore, he became The Hero Bear. However, the tragedy only began to unfold. My father found out that I had fallen from rooftop with The Bear. He got really pissed at me and at The Bear, and he punished us both.

My physical punishment was ok because my wound eventually healed. The punishment for The Bear, however, was dramatic and horrible. He was burn to ashes in front of my eyes. His face was the last thing to burn, and I can still remember the exact moment his plastic eyes melted. In the end, although The Bear had just saved my life, I was left with more pain. I survived the fall without a scratch, but I was left with a permanent scar from my father.

It was my first break up or goodbye. I felt for the first time ever scared to loose something that I love. It was at this moment I began to shut myself off.

Happily ever after didn’t exist anymore after that moment. I was 3.5 years old at the time. The Bear burned to ashes, and since then, I am kinda ready for goodbyes.