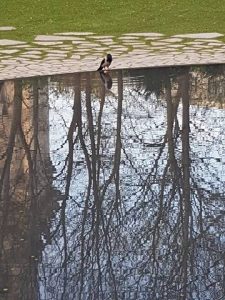 If a crow softens a Brezel in a pool of water and no one is around to witness it, does it make a sound? Indeed, silence is the dominating force in this complex work by Julian Wacker – silence and the whimsical intelligence of fowl. For just as the first ripples of the crow’s deed reach the viewer from across the pool, so too does the notion that a mere animal can display the same acumen one uses when dipping a biscuit in a cup of tea in order to joy the moist softness. Relish the stillness of this photograph and ponder your connection to our feathered friend. You are the witness, and those sounds are your chuckle and the whir of cogs in your brain.

The artist’s choice to frame his work in the context of the Memorial to the Sinti and Roma Victims of National Socialism presents a cryptic twist. Does the photograph merely contrast the tragically powerful and the curiously banal? Or is it a feathery comment on how we as humans create cenotaphs to remember the victims of our most horrendous actions? The crow will be gone, and with him, his breakfast. But the enduring serenity of the pool and rugged slabs around it will remain, interrupted briefly by a tiny splash and the click of a camera phone.